Go ahead, Angela, make my day: Greece and the euro’s future 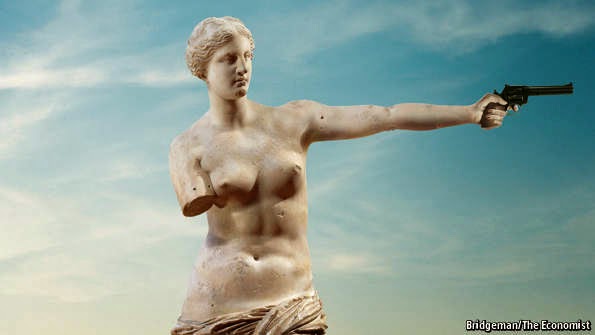 It was in Greece that the infernal euro crisis began just over five years ago. So it is classically fitting that Greece should now be where the denouement may be played out—thanks to the big election win on January 25th for the far-left populist Syriza party led by Alexis Tsipras (see article). By demanding a big cut in Greece’s debt and promising a public-spending spree, Mr Tsipras has thrown down the greatest challenge so far to Europe’s single currency—and thus to Angela Merkel, Germany’s chancellor, who has set the austere path for the continent.

The stakes are high. Although everybody, including Mr Tsipras, insists they want Greece to stay in the euro, there is now a clear threat of Grexit. In 2011-12 Mrs Merkel wavered, but then decided to support the Greeks to keep them in the single currency. She did not want Germany to be blamed for another European disaster, and both northern creditors and southern debtors were nervous about the consequences of a chaotic Greek exit for Europe’s banks and their economies.

This time the odds have changed. Grexit would look more like the Greeks’ fault, Europe’s economy is stronger and 80% of Greece’s debt is in the hands of other governments or official bodies. Above all the politics are different. The Finns and the Dutch, like the Germans, want Greece to stick to promises it made when they twice bailed it out. And in southern Europe centrist governments fear that a successful Greek blackmail would push voters towards their own populist opposition parties, like Spain’s Podemos (see article).