Germany and Greece: Go if you must 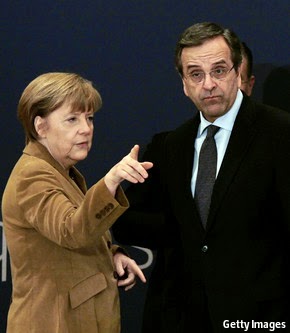 If the Syriza party wins Greece’s election on January 25th, most think the power to negotiate rests with Angela Merkel, the German chancellor. “A small minority, centred on the conservative leadership of the German government,” says Alexis Tsipras, Syriza’s leader, “insists on rehashing old wives’ tales and Grexit stories.”

So it seemed after German officials leaked to Der Spiegel, a weekly, their assessment that Grexit would not only be bearable but might even make the euro stronger. Other problem countries have weathered the crisis (Portugal, Ireland) or are making progress (Spain). The euro zone now has a bail-out fund and a banking union. German banks and insurers have reduced their exposure.

On January 5th Steffen Seibert, Mrs Merkel’s spokesman, insisted that German policy had not changed: it still aimed to hold the euro zone together. Yet all sides are now debating Grexit. Some in Mrs Merkel’s Christian Democratic Union (CDU) said giving in to Greece would encourage other countries, including France, to rebel against spending cuts and supply-side reforms. Sigmar Gabriel, leader of the Social Democrats, Mrs Merkel’s coalition partners, said Germany must not be “blackmailed”.