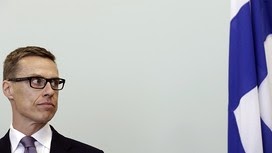 Finland has emerged as the biggest stumbling block to negotiating a new bailout deal with an incoming Greek government, telling its eurozone partners that it will not support debt forgiveness and is reluctant to back another extension of the €172bn rescue.

In an interview, Finland’s prime minister said he would give a “resounding no” to any move to forgive Greece’s debts and warned that a new government in Athens would have to stick to the terms of the existing bailout.

The comments by Alex Stubb represent a blunt intervention in Greece’s upcoming election where Syriza, the radical left party that is currently leading the polls, has put debt relief at the core of its programme.

“We will remain tough. It is clear that we would say a resounding no to forgiving the loans,” Mr Stubb said.

“We naturally do not want to influence the Greek elections,” Mr Stubb added. “But I think it’s fair to Greeks and Finns to say out loud that some of the statements by Greek parties, and their presentations and ideas about the current programmes are simply unacceptable for Finland.”