Eurozone fears a deal with Tsipras more than Grexit 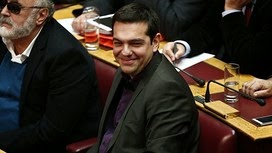 The last time Alexis Tsipras came this close to power, you could almost smell the panic.

The leftist firebrand emerged from nowhere to come within a hair’s breadth of unseating Greece’s two mainstream parties in national elections three years ago by repudiating Athens’ €172bn EU-led bailout. Without the rescue funding, Greece would have defaulted on its national debt. A bank run was accelerating. An implosion of the eurozone and global economic catastrophe loomed.

So after an inconclusive first election in June 2012, EU leaders engaged in a bit of fearmongering — justified by the fact that their fear was real. Vote for one of Greece’s two mainstream parties in a second election, Greek voters were told, or “Grexit” and Armageddon would follow.

“What alternative did we have?” recalled one senior European leader involved in the campaign, acknowledging the message was akin to requiring Greeks to re-elect those who got the country into trouble in the first place. “Those were the parties that wanted to keep Greece in the euro.”