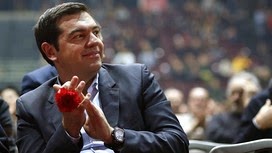 Greece changes on January 25, the day of the election. My party, Syriza, guarantees a new social contract for political stability and economic security. We offer policies that will end austerity, enhance democracy and social cohesion and put the middle class back on its feet. This is the only way to strengthen the eurozone and make the European project attractive to citizens across the continent.

We must end austerity so as not to let fear kill democracy. Unless the forces of progress and democracy change Europe, it will be Marine Le Pen and her far-right allies that change it for us.

We have a duty to negotiate openly, honestly and as equals with our European partners. There is no sense in each side brandishing its weapons.

Let me clear up a misperception: balancing the government’s budget does not automatically require austerity. A Syriza government will respect Greece’s obligation, as a eurozone member, to maintain a balanced budget, and will commit to quantitative targets. However, it is a fundamental matter of democracy that a newly elected government decides on its own how to achieve those goals. Austerity is not part of the European treaties; democracy and the principle of popular sovereignty are. If the Greek people entrust us with their votes, implementing our economic programme will not be a “unilateral” act, but a democratic obligation.