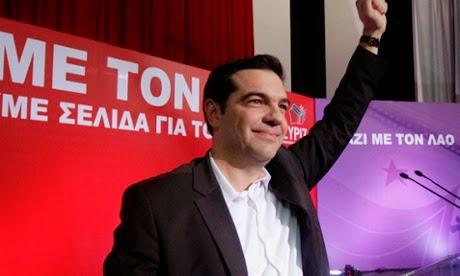 It is not hard to imagine leaders in Madrid, Lisbon and Rome fearing the bitter general election that is due to shape Greece’s future and play a key role in setting the continent’s economic course this year. The snap poll, called following parliament’s failure to elect a new president, will bring added instability to a eurozone already mired in economic stagnation and internal wrangling.

Yet last week, even as the anti-euro party Syriza scented victory and made clear it was preparing for a fight with Brussels, the financial markets remained calm. The Italian government refinanced €3bn (£2.3bn) of sovereign debt at an average interest rate of 1.89%, its lowest on record. It seems the spreadsheets that control market thinking have already priced in the prospect of Greece being cut adrift by its brothers and sisters. If the results of the election on 25 January show that Greeks are prepared to quit the euro unless they can extract major concessions, then the message seems to be: let them walk.