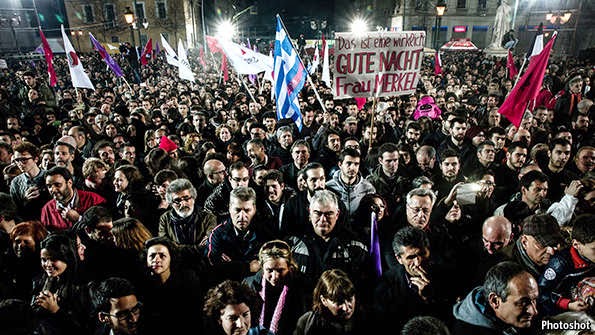 “We have finally put behind us the vicious cycle of fear and austerity.” So declared Alexis Tsipras, Greece’s new prime minister, to crowds cheering his party’s election victory on January 25th. Up to then, countries on the edge of the euro zone, forced to embrace harsh budget cuts and pledges of reform as the price for their bail-outs between 2010 and 2013, had—surprisingly—accepted the nasty medicine without a big populist revolt. That changed when Syriza, a radical far-left party led by Mr Tsipras, won power after campaigning to cast aside austerity, backtrack on reforms and insist that Greece’s vast debt is slashed.

These promises may have won votes for Syriza, but they have given investors the jitters. The stockmarket swooned—led by Greek banks, which suffered their biggest one-day drop ever on January 28th—and short-term bond yields jumped. Syriza’s pledges are also unacceptable to other European governments, whose already sulky voters resent stumping up any more for Greece. The one that matters most is Germany. The country’s chancellor, Angela Merkel, will be wary of any concessions that might encourage insurrectionist parties elsewhere in Europe.

His first public act as prime minister was to visit a memorial for 200 Greeks killed by the Nazis in 1944: a gesture wreathed in symbolism for a man who rails against the German-led “occupation” of his country. Soon afterwards, he objected loudly to a supposedly unanimous EU statement criticising Russia’s renewed aggression in Ukraine.

A colourful team of ministers hardly suggests that compromise is on the cards. Yanis Varoufakis, appointed as finance minister, is an economist and blogger who has protested against “the fiscal waterboarding policies that have turned Greece into a debt colony”. Mr Varoufakis honed his skills as an academic, but also once worked as a consultant for a computer-games firm. Panagiotis Lafazanis, a Marxist who heads Syriza’s far-left faction, will run a ministry incorporating energy and the environment. At least George Stathakis, the new minister for the economy together with tourism, transport and shipping, the country’s biggest industries, is an expert on Greece’s first big bail-out, the Marshall plan of 1948. 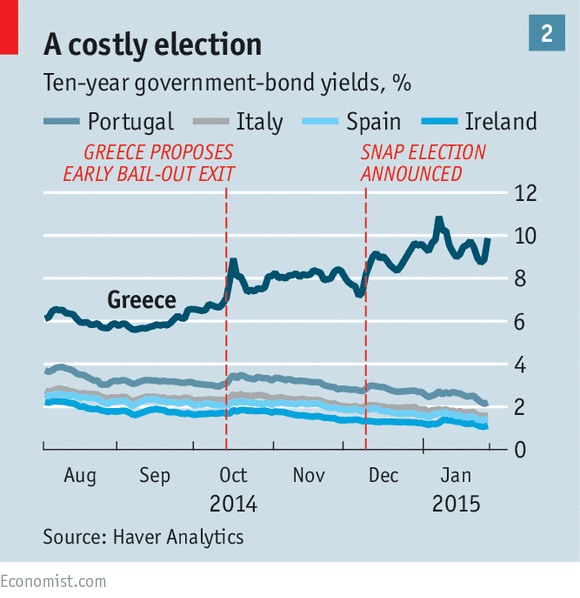 Posted by Yulie Foka-Kavalieraki at 11:02 PM