Berlin insists it expects Greece to remain in eurozone 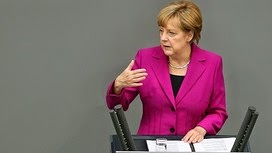 Germany has insisted that it expects Greece to stay in the eurozone, despite a news report claiming Berlin was ready to see Athens quit the common currency if the populist Syriza party wins this month’s snap election and reneges on the country’s reform programme.

Der Spiegel magazine reported on Sunday that Chancellor Angela Merkel was abandoning her previous commitment to keeping Greece in the eurozone at any price, and preparing instead for a possible Greek exit in the event that Syriza — which has called for drastic debt cuts and an end to austerity — confronts EU partners with unacceptable demands.

Ms Merkel and Wolfgang Schäuble, her hardline finance minister, have changed their approach because they think the stability of the whole eurozone is no longer at risk as it was at the height of the crisis in 2012, says the magazine, citing unnamed officials.

The article comes amid a growing media debate in Germany about the wisdom of further assisting Greece in the face of the country’s huge debt burden, the popular opposition to austerity and the likelihood of victory for Syriza, which is leading opinion polls.

However, Ms Merkel’s government said on Sunday that it was working on the assumption that even after a Syriza win, Athens would continue to satisfy the requirements of its international creditors, headed by EU institutions.