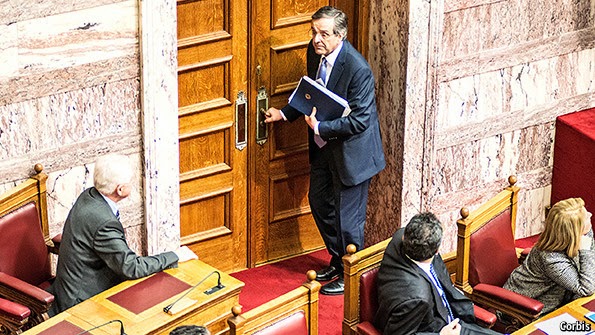 A Greek presidential election is not supposed to make headlines. The ruling party’s candidate, typically a low-key retired politician, normally wins the required three-fifths majority after a three-round vote in parliament. In the 40 years since Greece replaced its monarchy with a republic led by a figurehead president, no big political upset has occurred. This time it could be different.

Antonis Samaras (pictured), the centre-right prime minister, has called a snap presidential election for December 17th, two months before Karolos Papoulias, the 85-year-old incumbent, steps down. This is at best a risky gamble. Sensing that political instability might rekindle the euro crisis, financial markets panicked. Prices on the Athens stockmarket plunged by almost 13% the day after the presidential vote was announced; yields on Greek ten-year bonds soared above 8% (see chart).

Mr Samaras said he was bringing the presidential vote forward to restore political stability, which he claimed was being undermined by persistent demands from the far-left Syriza party, led by Alexis Tsipras, a radical populist, for an early general election. Since it came first in the European elections in May, Syriza has kept a strong lead over Mr Samaras’s New Democracy (ND) party in the opinion polls. Yet if Mr Samaras’s candidate for the presidency, Stavros Dimas, a former European environment commissioner, fails to win 180 out of 300 votes in the final round, Mr Tsipras will get his way, as an early general election must then be held.

Posted by Yulie Foka-Kavalieraki at 1:03 AM