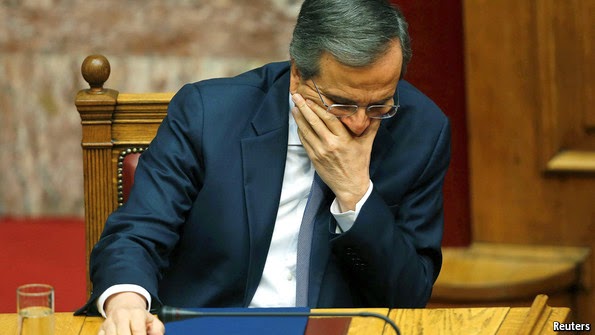 Antonis Samaras, the centre-right Greek prime minister, lost one election on December 29th. Now he will have to fight another. His New Democracy party’s candidate for president, Stavros Dimas, fell 12 votes short of the required three-fifths majority in a third and final ballot by Greece’s 300 MPs. As the constitution demands, a snap general election will now be held on January 25th. ND is trailing the far-left Syriza opposition, according to the opinion polls. Once again, the prime minister’s chances of victory look slim.

Mr Samaras made two television appeals for lawmakers to back Mr Dimas, a former European environment commissioner, for the ceremonial post. His election would have kept the fragile ND-led coalition in power long enough to negotiate an exit from Greece’s unpopular austerity programme with the European Union and IMF, including a precautionary credit line from the euro-zone bail-out fund. Many independent and opposition lawmakers who rejected Mr Dimas are unlikely to be re-elected, yet not even self-interest persuaded them to back the government.

Such stubbornness heralds a bad-tempered election campaign. Alexis Tsipras, Syriza’s radical leader, calls Mr Samaras “finished”. He plans to renegotiate Greece’s bail-out. Although he no longer threatens to halt debt repayments unilaterally if his party comes to power, he still wants to secure a big write-off. Greece’s creditors would oppose that, and also Mr Tsipras’s proposals to reverse other reforms and launch a €11 billion ($13 billion) welfare package, to be financed by better tax collection. With more than €7 billion of lending suspended until Athens reaches agreement with its “troika” of creditors on more tax, labour and pension reforms, Greece will soon run into trouble. Hard-pressed taxpayers are already struggling; more than €1 billion of income and property tax goes uncollected every month. Mr Tsipras’s promises sound alluring to angry, impoverished Greek voters. 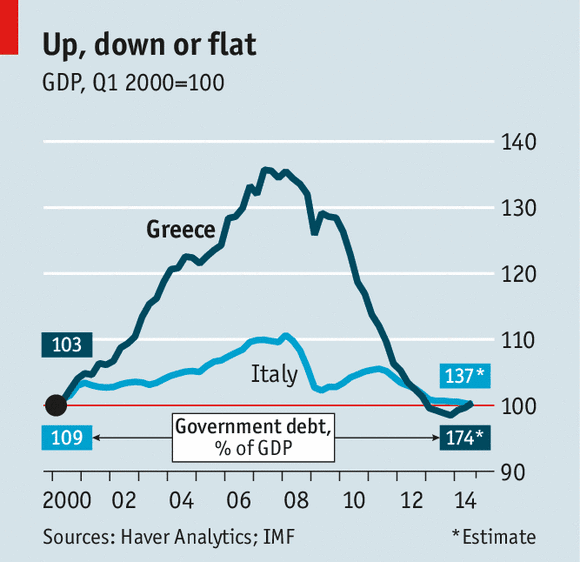