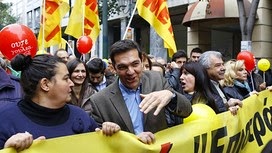 The charm offensive launched by Greece’s leftwing Syriza party to persuade foreign investors that it would not wreck the country’s economy and finances were it to win power suffered a notable hiccup last month.

After attending a meeting with Syriza economists in London, a hedge fund analyst wrote that their plans for the country were “total chaos” and warned of a run on bank deposits if the party came to power.

As that possibility draws near, with Syriza leading the polls and a snap election set for January 25, the more surprising factor may be the party’s success at dispelling at least some investors’ worst fears.

Alexis Tsipras, Syriza leader, has abandoned his pledge to “tear up” the bailout agreement with international creditors and is instead emphasising more moderate steps to address the debt load as well as his deep commitment to the euro.

Krishna Guha, of Evercore ISI, warned that, at a minimum, investors faced “a four-week period of elevated uncertainty in which eurozone risk assets will struggle to perform.”

But, Mr Guha added: “We believe that Tsipras will prove more pragmatic than past Syriza rhetoric suggests. He has opened back-channels to Berlin, Paris and Frankfurt, and has every incentive to try to negotiate relatively cosmetic changes to Greece’s programme and ride the early-stage Greek recovery rather than derail it.”