Greece has finally emerged from the six-year recession that shrank its economy by a quarter, tripled unemployment and left drugs in short supply. But the struggle over its finances isn’t over. Ever since it announced that hidden deficit spending had left the country broke, Greece has been a flashpoint in the European Union’s broader economic debates as well as a practical problem for the countries that banded together to adopt the euro. To richer northern countries, Germany in particular, Greece is a spendthrift needing harsh economic medicine. To many Greeks, the depth of their travails has shown the limits – or even folly — of the spending cuts and tax increases pressed on it and other ailing economies like Portugal, Spain, Ireland and Italy. In 2012, conflicts over Greece’s debts threatened to tear the euro zone apart. That sense of emergency has faded. Even so, another Greek political crisis is echoing on a continent mired in economic stagnation.

Greece will hold a snap election in early 2015 after Prime Minister Antonis Samaras gambled on shoring up his fragile coalition by forcing a parliamentary showdown. He nominated a successor to the country’s current president, then failed to get the necessary support in three separate votes. The anti-austerity protest party Syriza is the favorite to win the ballot, which will likely be held Jan. 25. Syriza’s 40-year-old leader, Alexis Tsipras, has promised to write off some of Greece’s 322 billion euros of debt, most of it owed to the EU, the International Monetary Fund and the European Central Bank. Samaras has warned that could lead to Greece being forced to leave the euro, a prospect that drove up yields on Greek bonds — but didn’t alarm Greeks used to years of chaos. Samaras hopes to make his own deal with the troika of creditors to ease austerity. 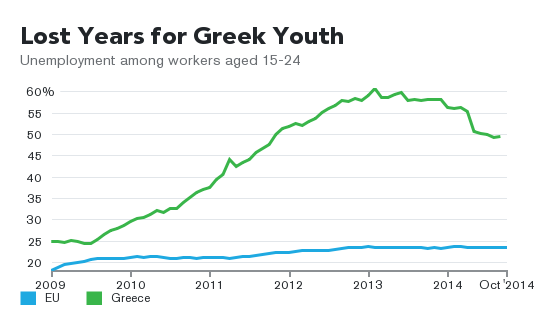