Greece’s election: The euro’s next crisis 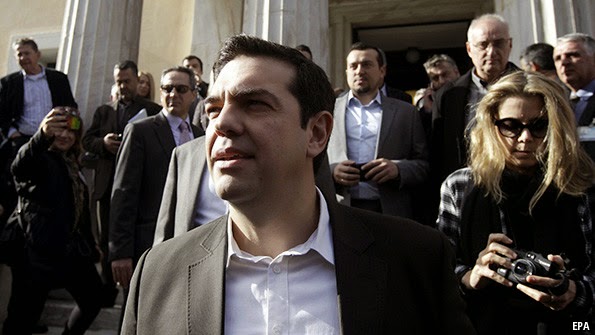 Ever since the euro crisis erupted in late 2009 Greece has been at or near its heart. It was the first country to receive a bail-out, in May 2010. It was the subject of repeated debate over a possible departure from the single currency (the so-called Grexit) in 2011 and again in 2012. It is the only euro country whose official debt has been restructured. On December 29th the Greek parliament failed to elect a president, forcing an early snap election to be called for January 25th. The euro crisis is entering a new, highly dangerous phase, and once again Greece finds itself at the centre.

Investors promptly swooned, with the Athens stockmarket falling by almost 5% in a single day, bank shares down by even more and Greek 10-year bond yields rising to a new 2014 high of 9.5% (over seven points above those for Italy). The reason for this collective outbreak of nerves is that the polls point to an election win for Syriza, the far-left populist party led by Alexis Tsipras (pictured). Although Mr Tsipras says he wants to keep Greece in the euro, he also wants to dump most of the conditions attached to its bail-outs, ending austerity, reversing cuts in the minimum wage and in public spending, scrapping asset sales and seeking to repudiate much debt. Such a programme seems, to put it mildly, to sit uncomfortably with Greece’s continuing membership of the singe currency.

The early election is likely therefore to create a political crisis in Greece. What happens beyond that is less clear. Investors seem to be betting that the people of Italy, Spain and France will peek at the chaos in Athens, shudder—and stick to the austerity that Germany’s Angela Merkel has prescribed for them. But that seems too sanguine to this newspaper. It is hard to believe that a Greek crisis will not unleash fresh ructions elsewhere in the euro zone—not least because some of Mrs Merkel’s medicine is patently doing more harm than good.