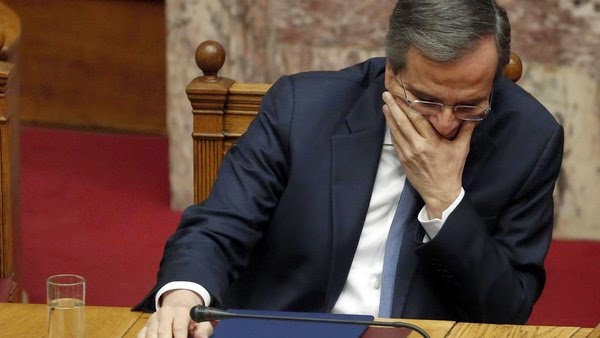 Fears of a fresh Greek crisis were ignited on Monday after Athens called a snap general election that could bring the anti-bailout Syriza party to power and put the country on a collision course with international lenders.

Investor concerns were revived after the Greek parliament rejected Prime Minister Antonis Samaras’s nominee for president, automatically triggering an election which is to be held on January 25.

Monday’s dramatic events revive dormant questions about Greece’s place in the eurozone, just two years after the country’s debt crisis nearly triggered a break-up of the currency union and shook the European project to its core.

It comes with much of the eurozone struggling with weak growth, the rise of populist anti-EU parties and widespread disenchantment with the politics of austerity.

Investors took fright at the prospect of a victory by Syriza, which has pledged to write off much of Greece’s debt and renegotiate the terms of its bailout. The Athens bourse fell almost 11 per cent to a two-year low before regaining some ground. Greek 10-year bond yields jumped to a year high of 9.8 per cent while the government’s short-term borrowing costs hit a record high of 12 per cent.