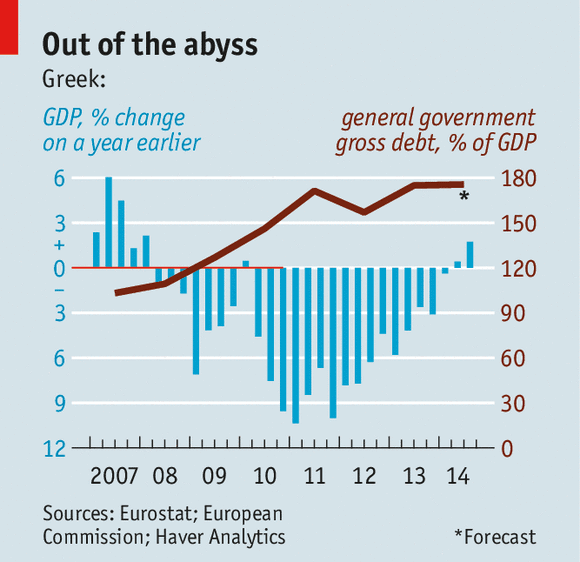 The euro area stayed in the doldrums in the third quarter, according to data released on November 14th. Output rose by 0.2% compared to the second quarter, equivalent to just 0.6% on an annualised basis. That was only slightly faster than the meagre 0.1% growth in the second quarter (0.3% annualised). Against this dismal backdrop there was one nice surprise: of the 14 countries in the 18-strong currency union that reported data, Greece fared best, growing by 0.7%.

It turns out that the Greek recovery started in the first quarter of this year, when it grew even faster, by 0.8%, according to the new figures (for technical reasons quarterly figures had been suspended since 2011); it then slowed to 0.3% in the second quarter. The upturn has meant that the economy is now growing on a yearly basis (see chart). Apart from a blip in early 2010 just before the first of two bail-outs, this is Greece’s first spell of annual growth since the start of 2008. Between the pre-crisis peak, in the second quarter of 2007, and the trough at the end of last year, GDP contracted by 27%, a decline rivalling America’s in the early 1930s.

Even though the euro zone as a whole is doing badly, the Greek recovery looks set to continue, at least in the short-term. An economic-sentiment index compiled by the European Commission stood at 102 in October, well above its level a year before, when it was 92, let alone during the worst of the euro crisis, when it sank below 80. Since the indicator tends to track GDP growth this suggests a decent start to the current quarter.