Where not to invest in Europe 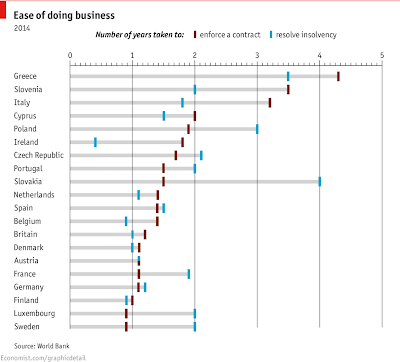 The World Bank released its annual "Doing Business" report on October 29th, ranking the world's 189 countries by how attractive they are to companies. That tiny Singapore led the list again this year and Eritrea was stuck in last place was not particularly surprising. Other performances were less easy to explain. Ukraine—which since February has been embroiled in a conflict with neighbouring Russia—leapt up the rankings, partly because some of the data capturing improved administrative practices was collected before hostilities flared.

Yet the report's most interesting data—on the time it takes to settle a dispute, or wind up a company—sheds light on the lacklustre business investment in Europe's periphery since the financial crisis. Countries where it is quick and easy to enforce contracts or wrap up failing firms are usually more attractive to investors than places with lethargic legal systems. In Greece and Slovenia, hit hard by the financial crisis, it takes much longer to do these things than countries such as France and Germany, whose economies have generally performed better. The situation has got much worse over the last few years. It now takes over two months longer to enforce a contract through the Slovenian court system than it did a year ago. And to do that in Greece now takes more than four years, up around 18 months from 2010. The only bright spot is that there may be a lot more business for Greek lawyers in the near future.

Read the Report
Posted by Yulie Foka-Kavalieraki at 8:45 AM