Patronage and bribery will persist in Greece 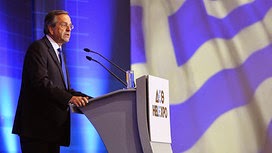 At first sight it is puzzling that Greece should be in a hurry to exit the EU-International Monetary Fund bailout on which it has depended since 2010. The yield on Greek 10-year sovereign debt soared above 9 per cent a couple of weeks ago.

Even at 7 per cent, the market rate is much higher than the rate at which Athens borrows from its official creditors. Like a sprinter falling at the last hurdle, Greece is in danger of tripping up because it wants to beat the clock.

For Antonis Samaras, prime minister, and his colleagues, however, this is not primarily a financial matter. It is about national dignity and, as is to be expected in a democracy, political calculation.

A yearning for restored national dignity pervades Greek attitudes to the EU-IMF bailout. The social and economic costs of the rescue, from mass unemployment to business closures, have been punishingly high.

The bailout reminds Greeks of how big powers have often exercised control over their country since the 1821-32 war of independence against Ottoman rule. For older Greeks, the 1941-44 Nazi occupation and British and US influence over postwar Greece are vivid memories. A quest for self-determination is central to the Greek identity.