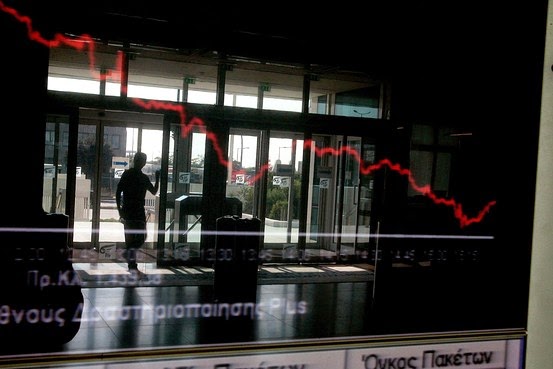 Greek financial markets slumped Wednesday, extending steep losses from a day earlier amid growing fears of renewed political instability and worries that the country may leave its bailout program before it is ready.

As stocks fell elsewhere in Europe and in the U.S., the Athens Stock Exchange’s general index closed 6.2% lower, recovering from earlier double-digit percentage declines, at 899 points, the lowest level in more than a year. Greek government bonds were also hit hard, with the yield on the 10-year bond reaching an eight-month high of 7.8%.

“Greece clearly has its own issues, but against a global market backdrop where we’re seeing such huge losses across so many different areas, any market with even a chink of weakness is going to get hammered and that’s exactly what we’re seeing here,” said David Vickers, a senior portfolio manager at Russell Investments, which has around $280 billion of assets under management.

Those issues have gained prominence in recent days. The current government is aiming to leave the bailout program, or scale back the degree of control international authorities exercise, at the end of the year, 18 months earlier than the rescue plan now calls for. The prospect that the antireform, radical-left Syriza party could come to power shortly after that, in elections early next year, has added to the concerns.