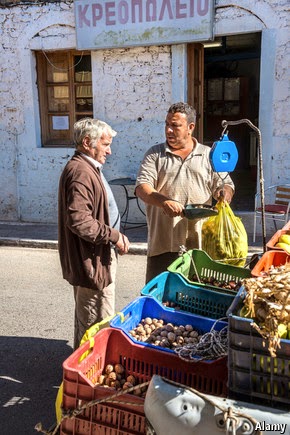 Two out of three Greek workers either understate their earnings or fail to disclose them to the taxman altogether, according to Stephen Hall, an adviser to the Bank of Greece. Last year an estimated 24% of all economic activity in Greece went undeclared to evade tax and regulation, well above the European average of 19%.

The IMF, which was in Athens this week to check up on Greece’s public accounts, would like to bring more of this activity into the sunlight, to boost government revenues. After a calamitous recession in which the economy shrank by 30%, government debt now stands at 174% of GDP; the budget deficit last year was almost 13% of GDP. But there is a risk that an overly aggressive tax-raising drive will compound the problem.

Greeks, even more than their counterparts elsewhere, feel that their taxes are wasted. One study, using data from the 1990s, put Greece’s “tax morale” fourth-lowest of 26 countries. Greece’s public sector is more corrupt than that of any other EU state, according to Transparency International, a pressure group. Satisfaction with public services is extremely low. No wonder, then, that many Greeks have few qualms about not paying their share.