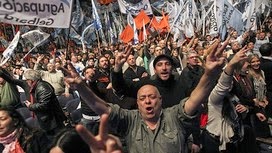 More than 400 of the world’s largest banks, investors and debt issuers have agreed a plan for dealing with financially stricken countries and their creditors, in a bid to prevent a repeat of the wrangling that has pushed Argentina into default.

After months of talks convened by the US Treasury in the wake of Greece’s restructuring, global debt experts will on Friday unveil a new framework that could transform the relationship between critically indebted nations and lenders.

Lawsuits filed by creditors against defaulting governments have doubled over the last decade and the changes come at a time when levels of sovereign debt have risen to record highs around the world in the wake of the financial crisis.

The fallout from recent defaults reignited calls for an international bankruptcy court, but market participants and Washington authorities favour a voluntary response rather than new statutory mechanisms.

The International Capital Market Association, whose members include banks, investors and debt issuers, has created fresh clauses for inclusion in sovereign debt contracts that will give countries the option to bind all investors to decisions agreed by the majority.