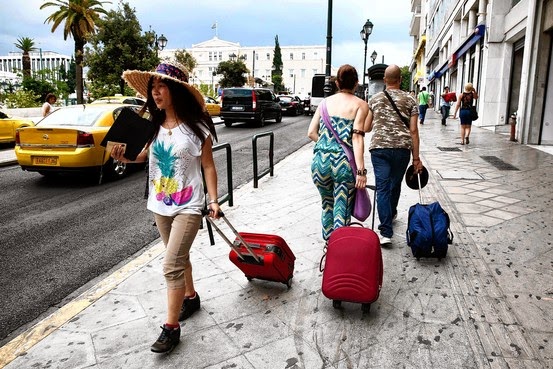 Greece's battered economy is poised to emerge from a six-year recession in coming months after data released Wednesday suggested that the economy grew on a quarterly basis for the first time since the start of the European debt crisis in early 2010.

Figures from the Hellenic Statistical Authority showed the recession eased sharply in the second quarter of the year with gross domestic product contracting at an annual pace of 0.2%, down sharply from a revised 1.1% drop in the January to March period.

The figure was better than expected, with most economists forecasting a drop of around 0.5% in the second quarter.

"We are seeing some indicators that the domestic demand is stabilizing faster than expected. Also net exports, particularly, tourism helped as well," said Nikos Magginas, senior economist at National Bank of Greece. "In any case, the trend is clear, the economy is stabilizing."

On a seasonally-adjusted quarterly basis, the second quarter data indicates that the economy expanded by between 0.4% to 0.7% compared with the first three months of the year—marking the first growth in 17 consecutive quarters—according to estimates put together by economists. The Greek statistics office doesn't provide quarterly data.

It is a significant step for an economy that has shrunk roughly 25% since its peak in mid-2008 on austerity measures demanded by international creditors in exchange for financial aid worth €240 billion ($320.74 billion).