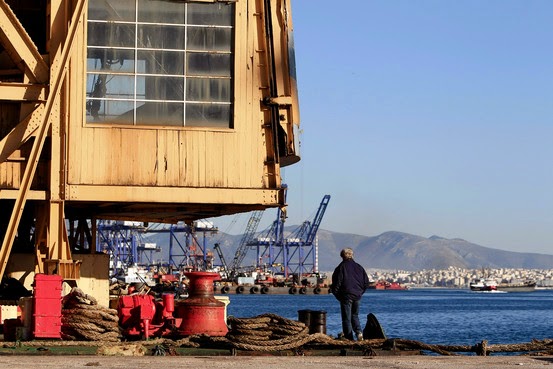 Most weekdays, Thanassis Tziombras, a 50-year-old worker at the shipbuilding zone here at the main Greek port of Piraeus, is up before dawn and out looking for work by 6 a.m.

Some 40 minutes away, in the posh Athens suburb of Psychico, Constantinos Tsimas, a 54-year-old U.S.-educated marketing consultant, wakes up to another day of working the phones and emails seeking clients.

There is a social gulf between these two men, but they are united in one thing: the financial and psychological struggle that comes with being older and unemployed in a country where the economy has shrunk by almost a quarter in six years.

Greece's economy has taken such a brutal beating that it is in a category apart from other European countries suffering through the recession. Where Greece lost some 25% of its economic output, Spain lost about 6%. Experts say that, even as the Greek economy begins to recover, the shock has been so severe that older workers are unlikely to ever hold full-time jobs again.

Unlike in other parts of Europe, Greek reforms have largely removed provisions that protected older workers. In Spain and Italy labor-market regulations favoring baby-boomers over their children are still largely in place, entrenching the so-called two-tier labor market. But in Greece, everyone seeking work largely faces similarly poor odds, said Raymond Torres, head of research at the International Labor Organization, the United Nations labor agency.