Euro crisis is sleeping, not dead

Euro zone policymakers may feel they can afford to relax this summer. That would be a terrible error. The euro crisis is sleeping, not dead.

The region is suffering from stagnation, low inflation, unemployment and debt. The crisis could easily rear its ugly head because the euro zone is not well placed to withstand a shock.

What’s more, it’s not hard to see from where such a blow could come. Relations with Russia have rapidly deteriorated following the downing of the Malaysia Airlines flight over Ukraine. If Europe imposes sanctions that make Moscow think again, these will hurt it too.

The euro zone needs to take measures to insure itself against disaster: looser monetary policy by the European Central Bank to boost inflation; a new drive for structural reform, especially in France and Italy but also in Germany; and some loosening of budgetary straitjackets.

First, though, look at the problem. Financial markets have been calm for the last two years since Mario Draghi, the ECB’s president, said he would do “whatever it takes” to preserve the euro. But the euro zone is barely growing. The International Monetary Fund last week predicted it would notch up just 1.1 percent growth this year. That’s a pathetic rebound given the recession’s severity.

There are, admittedly, some bright spots. Spain is enjoying a moderate recovery, largely as a result of effectively implementing root-and-branch reform of its labour market and banking system. Even Greece seems to be on the road back from Hades. 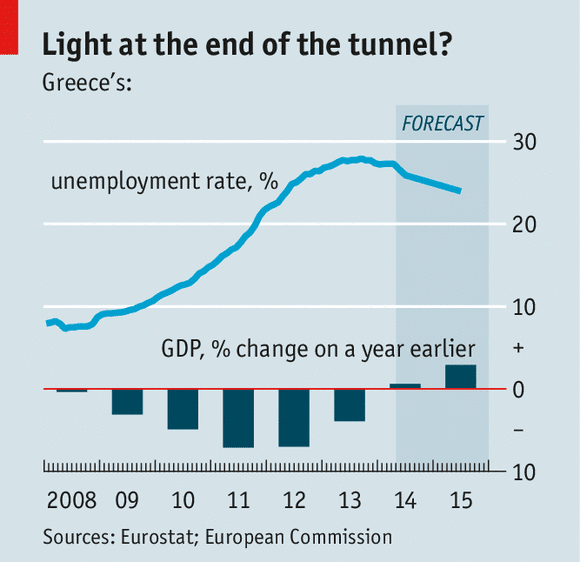 Tourists dived for cover beneath restaurant tables as shooting broke out in Monastiraki, a crowded neighbourhood in Athens, on July 16th. Greek anti-terrorist police had trailed Nikos Maziotis, one of the country’s most wanted fugitives, to a shop selling camping equipment. As he fled, Mr Maziotis opened fire with a handgun. He was arrested after being shot in the shoulder by a police officer.

Appearing before an investigating judge, Mr Maziotis said his job was “being a revolutionary”. He is accused of belonging to Revolutionary Struggle, a leftist extremist group that claimed responsibility for staging a rocket attack against the American embassy in Athens in 2007 and for several car-bomb explosions. The most recent, outside the IMF office in Athens in April, came at a time when Greece took another step towards recovery, issuing its first sovereign bond since 2010.

Athens is enjoying its best year for tourism since it staged the summer Olympics in 2004. Fortunately, the shoot-out in Monastiraki was quickly over. “If there had been serious casualties, bookings would have been cancelled across the board. It goes to show how fragile the tourist industry is,” says Panos Asimacopoulos, a travel agent in Athens.

The Greek recovery is similarly frail. After a record 24 quarters of negative growth, the economy is forecast to grow by almost 1% this year. About 20,000 new jobs will be added over the summer, according to the National Bank of Greece, reversing six years of declining employment.

Business-confidence indicators are at a six-year high and consumers are again flocking to Athens’s shopping malls. The finance ministry says Greece is on track to hit this year’s target of a budget surplus, before interest payments, of 1.5% of GDP. 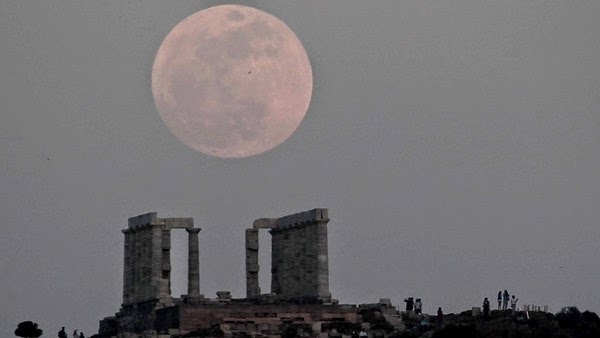 by Ralph Atkins and Kerin Hope

The white marble steps of the Grande Bretagne hotel on the edge of Syntagma square in Athens sparkle in the summer sun. Stone ripped out by protesters during riots at the height of the eurozone crisis in which Greece defaulted in 2012 has been replaced. The square heaves with tourists.

Greece seems back to normal. After contracting 25 per cent since early 2008, the economy has stabilised; this year it might even return to growth. Greece has also cleaned up its image in global capital markets. The government raised €3bn in five-year bonds at an interest rate of just 4.95 per cent in April, and a further €1.5bn in three-year debt this month.

Beneath the calm, however, fears remain about the future of the country, which two years ago threatened the collapse of Europe’s monetary union. “Risks have diminished substantially but a new constellation of economic and political risks may threaten reform implementation and economic recovery,” warns Lucas Papademos, prime minister from November 2011 until April 2012.

Sharp falls in incomes and “extraordinarily high” unemployment “have provided support to political forces on the extreme right and radical left”, he adds. “The greatly improved capital market conditions are not yet reflected in the Greek economy.”

One senior Greek businessman admits: “I was amazed that the government could issue bonds. How short are memories?” 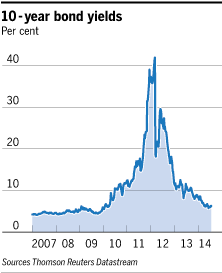 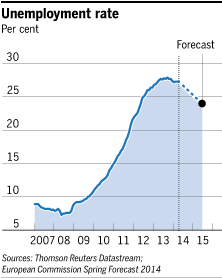 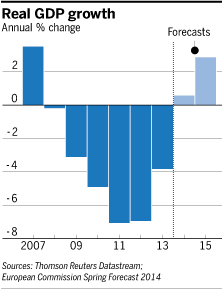 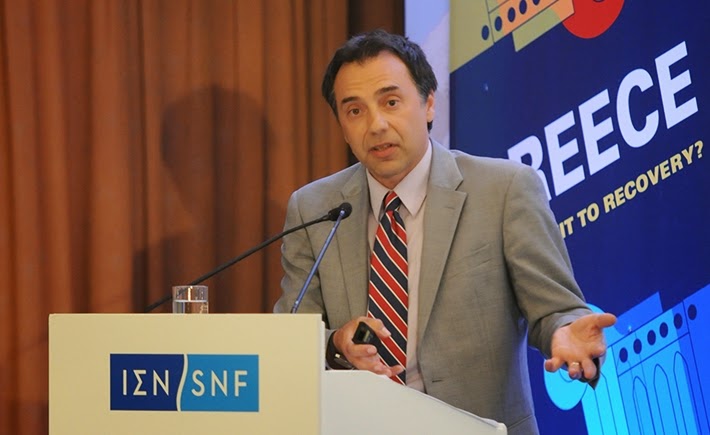 According to BlackRock’s quarterly Sovereign Risk Index Greece is among the countries most likely to go bankrupt That follows the relatively recent statement of the German finance minister Wolfgang Schäuble that Greece “..would have to continue to meet the troika's demands for reforms or risk leaving the eurozone.” The statement reflects disquiet among creditors to recent efforts by the Greek government to relax fiscal austerity measures to calm voter anger, following the defeat of the coalition government in the recent European elections (interpreted by many as increasing political/country risk--the radical left “Syriza” could possibly take power in the next elections). The use of such strong language is not just surprising; it also brings us back to the 2012 ‘Grexit talks’, a time in which the country was facing the real possibility of leaving the eurozone. Last week, Focus magazine reported that Nonperforming Loans (NPLs) in Greek Banks pose a serious threat to the “Grecovery” prospects, currently at the sky-high level of 33.5 percent, up from 31.9 percent at the end of 2013.

Much has been said about the results of the austerity program implemented in Greece by the ‘Troika’. Heavy taxation during 2010-2012 resulted in a cumulative inflation rate of almost 10 percent which substantially hit exports and competitiveness, undermining the internal devaluation target of increasing competitiveness at the same time.

In the meantime, the repeated postponement of hardcore structural reforms and privatizations let the burden fall almost entirely on the private sector through a storm of heavy taxation and huge wage cuts. As for the extraordinarily high level of wages in particular, these were mainly nested in the clientelistic, partitocratic state, notorious for excessive spending and corruption, and not in the productive sector of the economy. Wages were never the main problem of the productive private sector; red tape, legal ambiguity and state-sponsored monopolies were the problem.

"Populism and Crisis Politics in Greece" by Takis S. Pappas

The 1970's witnessed the institution of political liberalism in Greece, which went hand in hand with significant social and economic advancement. Four decades later, the same country is a latter-day 'sick man of Europe'. What went wrong? And why did the more recent global crisis plunge Greece into abject misery? This study provides compelling and original answers to these questions through putting populism at center stage. By introducing new concepts, focusing on micro-mechanisms, and empirically analyzing a large variety of sources, the author shows how populism became predominant in Greek politics and contaminated all major political parties, eventually causing a major polity crisis. Besides its particular interest in the specific case of Greece, the text offers new insights about how states may fail, how populism develops at single-nation level, and what could happen when it reigns supreme. It also makes a strong statement about the corrosive power of populism on modern liberal democracy.

Takis S. Pappas is Associate Professor of Comparative Politics at the University of Macedonia, Greece, and a Fellow at the European University Institute, Florence, Italy. He is the author of two previous books and many articles on party politics and political leadership, among others. He currently lives in Strasbourg, France, working on a new book project about Europe's populist voters.