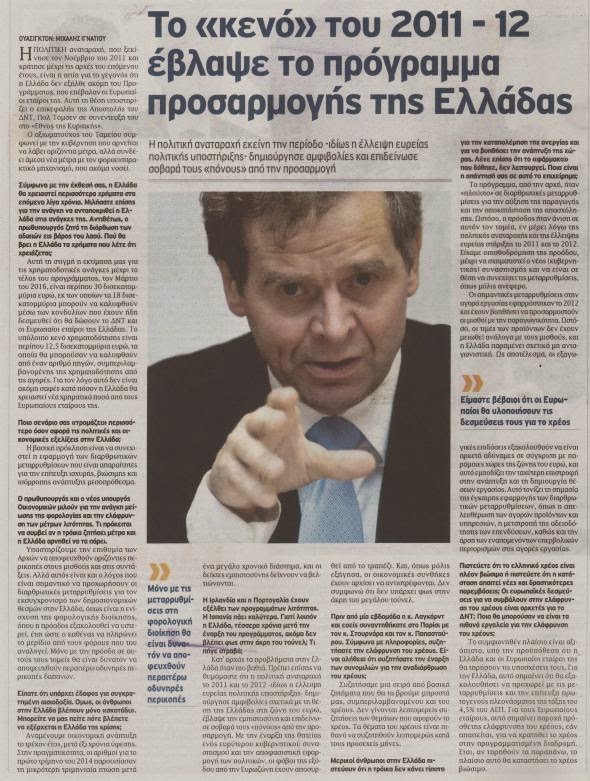 According to your report, Greece will need more money in the next few years. You also talk about the need for Greece to meet its needs. On the contrary, the Prime Minister calls for correction of the injustices against the people. Where will Greece find the money that you say it needs?

We currently estimate the financing needs through the end of the program in March 2016 to be about €30 billion, of which €18 billion can be covered through funds already committed by the IMF and Greece’s European partners. The remaining financing gap is about €12½ billion, which could be covered from a number of sources, including market financing. Thus, it is not clear yet whether Greece will need new money from its European partners.

Which scenario “scares” you the most in terms of political and economic developments in Greece?

The key challenge is to continue implementing structural reforms that are essential to achieving strong, sustained, and balanced growth over the medium term.

The Prime Minister and the new finance minister talk about the need to reduce taxation and ease austerity measures. There are rumors around that they have already decided “no more measures, enough is enough.” What's your response? And what is going to happen if the Troika asks for measures and Greece refuses to take them?

We have just completed a review, and I am confident that the government will meet the commitments that they have undertaken in this regard. After all, the government’s determination is demonstrated through its performance on the fiscal targets, which has been exceptional by any international comparison.

As for measures, we support the authorities’ desire to avoid across-the-board cuts in wages and pensions. But this is also why it is important to press ahead with structural reforms to modernize Greece’s fiscal institutions, such as strengthening tax administration, where progress continues to lag, so that everyone pays their fair share of taxes. Only with progress in these areas will it be possible to avoid further painful expenditure cuts.