How the euro was saved 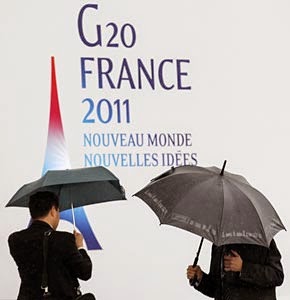 To the astonishment of almost everyone in the room, Angela Merkel began to cry.

“Das ist nicht fair.” That is not fair, the German chancellor said angrily, tears welling in her eyes. “Ich bringe mich nicht selbst um.” I am not going to commit suicide.

For those who witnessed the breakdown in a small conference room in the French seaside resort of Cannes, it was shocking enough to watch Europe’s most powerful and emotionally controlled leader brought to tears.

But the scene was even more remarkable, those present said, for the two objects of her ire: the man sitting next to her, French President Nicolas Sarkozy, and the other across the table, US President Barack Obama.

It would be the low point in a brutal, recrimination-filled night, one many participants would recall as the nadir of the three-year eurozone crisis. Mr Sarkozy had hoped his leadership of the Group of 20 summit would cement his standing on the global stage en route to re-election. Instead, everything was falling apart.

Greece was imploding politically; Italy, a country too big to bail out, appeared just days away from being cut off from global financial markets; and Ms Merkel, try as Mr Sarkozy and Mr Obama might, could not be convinced to increase German contributions to the eurozone’s “firewall” – the “big bazooka” or “wall of money” they believed had to grow dramatically to fend off attacks by panicking bond traders.