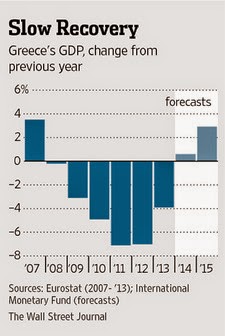 There seems to be a broad consensus—among voters and in the markets—that this week's European parliamentary elections don't matter very much.

Although the Parliament has gained new powers over the years, few voters identify with it. Polls suggest many will see the election as an opportunity to cast protest votes for populist parties. Most voters suspect the outcome will make little difference to the future direction of Europe, which will in any case continue to be set by national leaders and parliaments.

But there is one country where the European elections really do matter.

In Greece, the elections will determine the future of the uneasy coalition government led by Prime Minister Antonis Samaras since June 2012. If the two coalition parties—New Democracy and Pasok—get a lower combined vote than the radical left-wing opposition party Syriza, the government would be in real trouble, acknowledges a senior minister. The outcome could be early national elections and a prolonged period of political instability.

As things stand, that seems unlikely: The latest polls suggest New Democracy will get 21% of the vote and Pasok 5.5%, compared with 21.5% for Syriza.

But even this may not be enough to guarantee the coalition's survival.

More
Posted by Yulie Foka-Kavalieraki at 12:50 AM