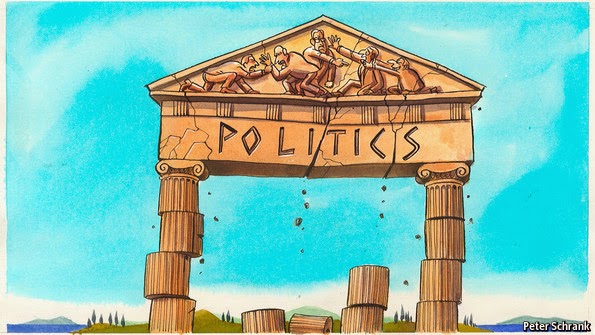 Greece’s chances of recovery after six years of misery are improving. Its first bond offering in four years, seen as a test of confidence, did much better than expected. Tourists are flocking in for Easter; hoteliers predict a record 19m visitors will come this year. One long-blocked resort project on Crete seems poised to go ahead, raising hopes that foreign investment may flow into other industries such as electricity and ports. Angela Merkel, the German chancellor and often one of Greece’s harshest critics, spoke encouragingly to young Greek entrepreneurs during a quick visit to Athens on April 11th.

Yet the new optimism does not seem to be trickling down to most voters. Unemployment fell slightly in January, but still stood at 26.7%. The social safety-net is stretched so thin that only one in ten of the unemployed gets any benefits. Private-sector workers complain of being paid months in arrears. An estimated 35% of Greeks now live in poverty, according to social workers and charities.

No wonder Greece’s clientelist political system is in tatters. It was once a politician’s responsibility to find jobs in the public sector for his (rarely her) constituents. Ambitious MPs extended their patronage to the private sector. “My application for an assistant supermarket manager’s job was picked on merit, but it wasn’t approved by the local MP—he wanted someone else,” says Simos, a 28-year-old economics graduate now working in Germany.

Angry voters used to shout “Thieves, traitors” outside parliament as lawmakers waved through a string of unpopular reforms demanded by Greece’s creditors. The centre-right New Democracy (ND) and the PanHellenic Socialist Movement (Pasok), partners in a fractious coalition with only a two-seat majority in parliament, are now widely blamed for the collapse of the patronage system that they built during 30 years of alternating in power.