Greece’s return to the markets: The prodigal son 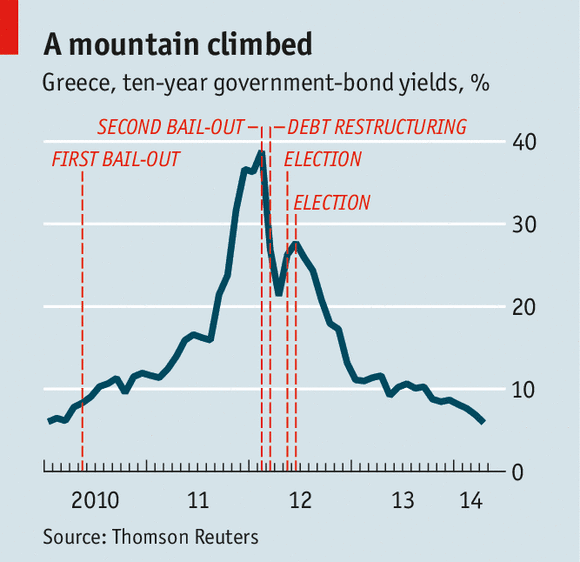 The journey has been an epic one, but Greece has reached, if not the destination, at least a waymark. The last time that its government raised long-term funds was in March 2010, just weeks before the markets lost confidence in Greece altogether, forcing its first bail-out. This week the Greek government returned to the markets, raising €3 billion ($4.1 billion) in five-year bonds at a yield of just under 5% in a heavily oversubscribed issue.

The amount might be small and the yield high compared with borrowing costs in other rescued countries, such as Portugal, whose five-year notes were trading at around 2.6%. But the notion of any bond issue at all still prompts eye-rubbing, given the depth of the Greek crisis. Six consecutive years of recession have seen the economy shrink by a quarter, prompting social and political turmoil that at its worst seemed quite likely to push Greece out of the euro zone. For most of the past four years a return to the markets on any terms seemed inconceivable, a view underscored by vaulting bond yields (see chart).

Over this period Greece has been wholly reliant on help from euro-zone governments and the IMF to meet its financing needs. In May 2010 it received its first three-year bail-out, of €110 billion. The aim then was that it should start tapping the markets again as early as 2012. Instead within less than two years Greece required a second and even bigger bail-out, raising the total amount of funding from euro-zone lenders and the IMF to €246 billion by 2016, equivalent to 135% of last year’s GDP. 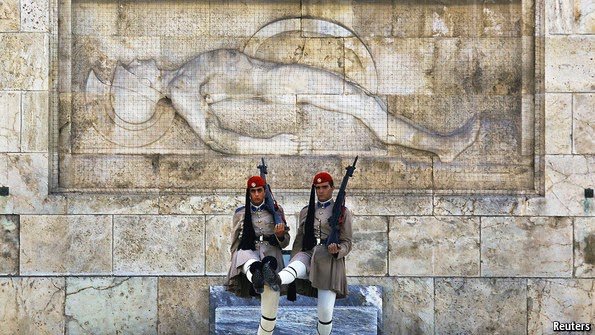 Posted by Yulie Foka-Kavalieraki at 2:08 AM