Greece Gets Strong Demand for Bond

Greece Thursday wrapped up its first longer-term bond sale in four years to strong demand, a nod to the glut of spare cash flooding financial markets as well as the steps taken by Greece to repair its battered economy.

Greece will raise €3 billion ($4.14 billion) by selling bonds that mature in 2019. The sale attracted more than €20 billion of demand, according to bankers working on the deal.

The bankers said the five-year bond would price to yield 4.95%—a sharply lower price tag than initial suggestions in the range of 5.25% to 5.5%. About 550 investor accounts placed orders, they added. The finance ministry said close to 90% of the demand came from abroad.

"[Greece is being] viewed differently. The Greek bond issuance is a turning point in the sovereign bond crisis," said Achilles Risvas, managing partner at Dromeus Capital Management in Switzerland, who said he is participating in the new Greek bond issue. "The European periphery obviously still presents highly attractive yields. The recent rally in bonds has pushed yields to record lows." 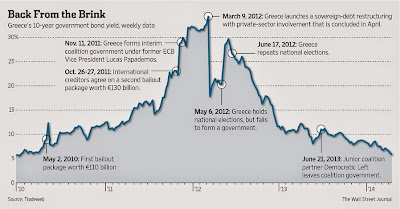 Posted by Yulie Foka-Kavalieraki at 3:16 PM