Greece Able to Call Its Own Tune 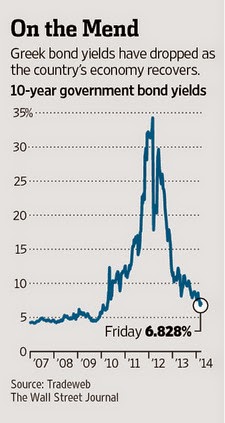 The euro crisis started in Greece, and it won't be over until doubts over Greece's prospects are erased.

That this is still some way off was clear from Greece's latest bailout review, the longest and most attritional yet. After seven months of haggling, the troika of official lenders—the European Commission, the European Central Bank and the International Monetary Fund—reached a deal last week that should be formalized by European Union finance ministers next month. It paves the way for the release of €8 billion ($11 billion) needed to repay maturing bonds.

But the striking feature of this agreement was the extent to which Athens got its way on vital issues relating to the budget, bank recapitalization and structural reform. That is a mark of how far a recovering economy, buoyant markets and increasing confidence in Prime Minister Antonis Samaras have changed the terms of engagement.

More
Posted by Yulie Foka-Kavalieraki at 12:02 AM