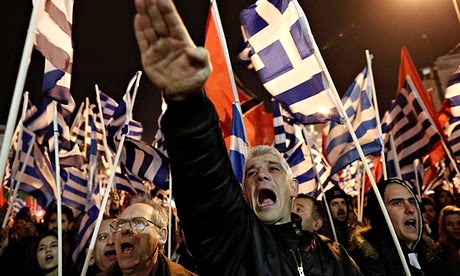 For half a year they have sat in their seventh-floor office, probing the murky depths of Europe's most violent political force. It is not a mission that many would envy. But Ioanna Klapa and Maria Dimitropoulou, long-time friends who belong to Greece's first generation of female judges, have gone about the business of dissecting Golden Dawn with the precision of a surgeon.

After trawling though computers confiscated from the far-right party's leaders, examining witnesses and wading through thousands of videos, pictures, speeches, documents and blogs, the court officials have compiled a 15,000-page dossier outlining why they believe Golden Dawn is a criminal organisation.

Under the weight of their inquiry – spurred by the murder of a leftwing musician at the hands of a senior party operative in September last year – the extremist group has begun to crack. Last week one Golden Dawn MP resigned, citing ignorance of the party's activities. Another was expelled after indicating that he, too, was about to leave.

"The justice system is one of the few meritocratic institutions in Greece and both of these women are known to be enormously courageous, fiercely independent and non-partisan," said Aliki Mouriki, a sociologist at the National Centre of Social Research. "For a party that is so macho and militaristic, it is an irony of history that two women should now be in this role."

More
Posted by Yulie Foka-Kavalieraki at 8:40 AM