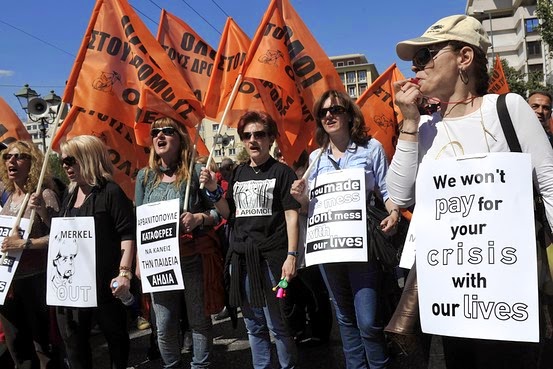 Last year, soon-to-be-unemployed school guard Eleni Pappa faced an ugly dilemma: which of her two children would have to give up their studies.

Ms. Pappa, who didn't have the money to pay for both, decided her 23 year-old son should cut short his college studies in northern Greece, return home, find a job, and help pay for his younger sister's tutoring lessons.

"I was forced to make a choice between my two children. My son has another two years to complete his degree," said Ms. Pappa. "Now he is in Athens handing out fliers for a living."

The 50-year-old, who until recently worked at a school in the posh Athens suburb of Psychiko, is a casualty of the Greek government's promise to lay off and transfer tens of thousands of public-sector workers in exchange for aid. Last year, she was among the first of those thousands to be placed in a labor reserve pool where the government had eight months to find her a new job, or let her go. That deadline expires on Monday, marking the arrival of the day Ms. Pappa has dreaded for months. There is no new job waiting for her.

"The way things are going we are heading for the soup kitchen," said Ms. Pappa, whose family will rely solely on her husband's 800-euro-a-month salary.

For the first time in more than a hundred years, Greece is sacking public servants.