Lavish praise has been heaped in recent weeks on the economic restructuring efforts of Greece, Ireland, Portugal, Spain and Cyprus, five troubled economies united in having received euro-zone bailouts.

Others in the 18-nation euro zone have done far less. France and Italy are often criticized by officials and economists for moving too slowly. But they are not alone. The tables are turning on another group of reform laggards, led by those who have called the shots throughout the euro crisis: Germany and its fellow hard-liners, including Finland and the Netherlands.

The bailout countries have, to a greater or lesser extent, dismantled regulation, confronted labor unions and cut red tape in the public sector. For them, failure to follow sometimes tough conditions laid down by experts from the European Commission, the European Central Bank and the International Monetary Fund—in the jargon, conditionality—would have meant delaying bailout funding.

Klaus Regling, the head of the euro zone's bailout funds, claims bailout countries are now the top performers in terms of clearing away obstacles to growth in their economies.

"In the EU, we have these five countries that are really reforming because there is conditionality, and conditionality works," Mr. Regling said in a recent interview. 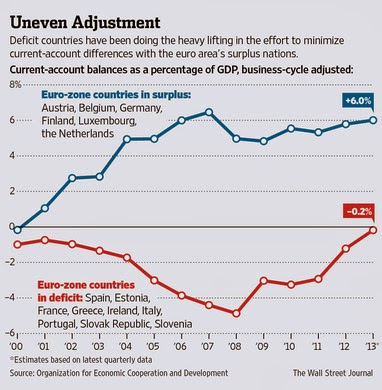 Posted by Yulie Foka-Kavalieraki at 12:27 PM