The Greeks are in a struggle for survival. And the odds are piling up against us. The fight is not only on the economic front, as we try to meet our commitments under an international 240-billion-euro bailout deal that has resulted in greatly reduced incomes, higher costs and taxes, and an overriding sense of insecurity. The danger is even more basic: Deaths are outnumbering births, people are leaving the country, and the population is aging so fast that in a few decades Greece may be unable to produce enough wealth to take care of its people and may cease to be a viable nation state.

“People tend to overlook the importance of the population, even though everything begins with it,” says Michalis Papadakis, professor emeritus of statistics and social security at the University of Piraeus, who has spent his life studying the issue. “Demographic reduction undermines defense capabilities, it cuts down the work force and obstructs business.”

He noted that 2011 was the first year in which the number of Greece’s residents dropped (with deaths exceeding births by 4,671). According to the European Union’s statistical service, in 2012 deaths in Greece outnumbered births by 16,300, while 44,200 more people left the country than moved to it.

Many European Union countries face a similar demographic problem and the Union as a whole is aging fast. But whereas European Union and national officials are looking for ways to deal with an aging population, in Greece the battle for economic survival is so overwhelming that no one has time for the bigger picture. In the urge to cut spending and stop borrowing, the Greeks have not been able to do the things that might have encouraged people to have children. 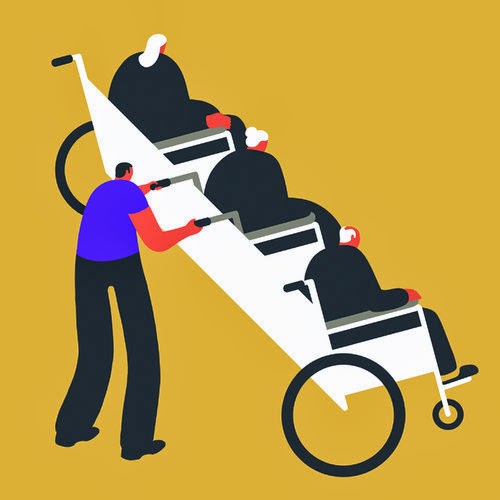 Posted by Yulie Foka-Kavalieraki at 8:29 AM