Little respite: A hard winter lies ahead for the Greek government 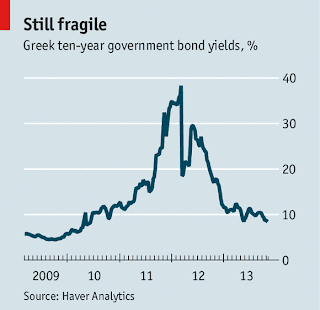 “It is the bad-news season,” says an adviser to Antonis Samaras’s struggling coalition government. He means the onset of winter, when cash-strapped Greeks start worrying about the price of heating fuel. A new property tax in next year’s budget, due to be presented to parliament on November 21st, is another headache. Farmers are being asked to pay tax on their landholdings for the first time. Squeezed by five years of austerity, one-third of property owners claim they will be unable to pay up, according to a survey by the Athens chamber of commerce.

Mr Samaras’s centre-right New Democracy party and its junior partner, the PanHellenic Socialist Movement (Pasok), narrowly survived a no-confidence vote in the early hours of November 11th. The motion was proposed by Alexis Tsipras, boss of Syriza, a hard-left opposition party, in an attempt to bring a fractious far-left faction of his party on board after he pledged in a speech during a trip to America that, if elected, he would not take Greece out of the euro. The coalition scraped through after a defection by a Pasok lawmaker, the sixth since last year’s general election.

The government can expect little respite. A vote on the new property tax is looming; it is unlikely to be approved by parliament in its present form. Rebel Pasok lawmakers say it should be replaced by a sweeping wealth tax, whereas New Democrats are under pressure from farmers to drop it altogether.