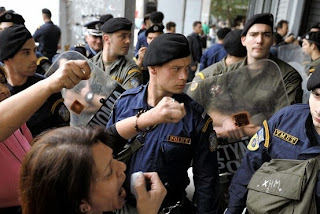 International budget inspectors began meetings with Greek officials Tuesday in a second round of talks aimed at bridging a contentious divide over what more Athens needs to do to secure its next tranche of aid.

The review comes amid heightened political tensions in Greece. Labor unions have called a nationwide general strike for Wednesday to protest further austerity measures, while the two parties in the coalition government are divided over a new property tax.

Representatives from the European Commission, European Central Bank and the International Monetary Fund—known as the troika—met with Finance Minister Yannis Stournaras for more than two hoursTuesday, their first session since the end of September. At stake is Greece's next slice of aid, worth €1 billion ($1.35 billion).

"It was a good first meeting," said a senior Greek finance ministry official who took part. "One of the things we discussed was the 2014 budget draft and a series of initiatives such as tax compliance and tax administration.