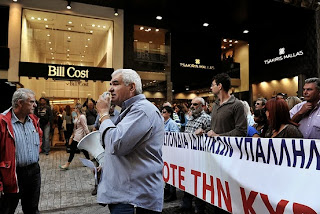 On the first day of extended Sunday shopping hours in Greece, Maria Kontou idly watched shoppers strolling past her store. There was no shortage of people on the streets, but few were buying.

"Not one customer has walked in today, and I opened more than four hours ago," she said, sitting in her ladies' fashion store in central Athens. "The problem is not when people can go shopping but whether they have the money to do so."

Sunday marked the first day of a contentious pilot program Greece has launched to help spur consumer spending in its recession-ravaged economy. Under reforms demanded by the country's international lenders, Greeks are now able to shop at department stores seven Sundays in the year, while smaller, independent shops can open every Sunday—depending on local authorities. Until now, Greek retailers could open for business only two Sundays a year, making the country's weekend-shopping-hour rules—which date back to 1908—some of Europe's most restrictive.

The government hopes the move will boost competitiveness and create tens of thousands of jobs as unemployment hovers around 27%. It is also aimed at impressing budget inspectors scheduled to arrive in Athens Monday to assess whether the country has made enough progress in economic reforms to be paid another tranche of loans under Greece's bailout program.

More
Posted by Yulie Foka-Kavalieraki at 12:07 AM