Discomfort Food: When the Going Gets Tough, Greeks Get Souvlaki 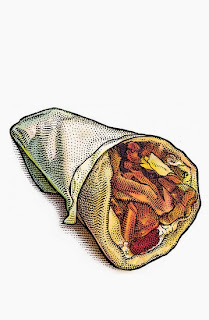 For out-of-work Greek advertising executive Giorgos Fragioudakis, the writing was on the wall. His company had failed in Greece's economic crisis and he was out of a job.

So, with no income and with a family to support, Mr. Fragioudakis this year changed professions and tapped into one of the few growth segments left in the Greek economy: He became a souvlaki chef.

Business is booming. And the fancy fast-food place he opened just a few months ago with two partners is now close to breaking even, he says. While admittedly a newcomer to the art of serving up grilled meat on a stick, Mr. Fragioudakis says there is a lot of crossover between advertising and selling fast food.

"I admit to being clueless about souvlaki; I learn day by day," he said. "But the organization you need to be able to complete an advertising project is unbelievable, and those skills are needed in this business."

What the hot dog is to New Yorkers, souvlaki—grilled meat sometimes also known as gyros or kebabs—is to Athenians. The quintessential Greek snack, it has been a mainstay in the country's cuisine since ancient times.

Homer refers to souvlaki in the Iliad and the Odyssey. So does Aristotle in his writings, while there are archaeological finds suggesting that the fast-food souvlaki stand may have been doing business as long as 3,500 years ago. 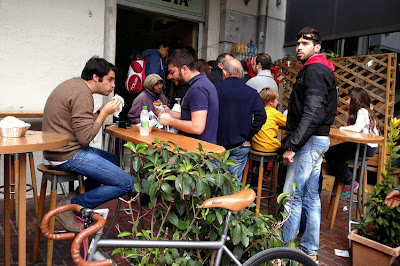 Posted by Yulie Foka-Kavalieraki at 8:10 AM