Across Europe, there is now a broad consensus that the decision to allow Greece to join the euro was a mistake. Yet ironically, the one place where this view is not widely shared is Greece itself.

Even after six years of recession, a 26% slump in output and unemployment of 27%, the Greek government considers membership of the single currency an article of faith, while 69% of the public supports the euro, according to a recent poll by the Pew Research Center.

Perhaps this isn't so surprising. The crisis did not come out of a clear blue sky. Greece missed multiple opportunities over many decades to fix a broken political and economic model marked by cronyism, corruption, bureaucracy and excessive borrowing: following the overthrow of the military dictatorship in the 1970s, when Greece joined the European Union in the 1980s and in the run-up to joining the euro in the early 2000s.

The current crisis may be Greece's last opportunity to turn itself into an effective modern state. 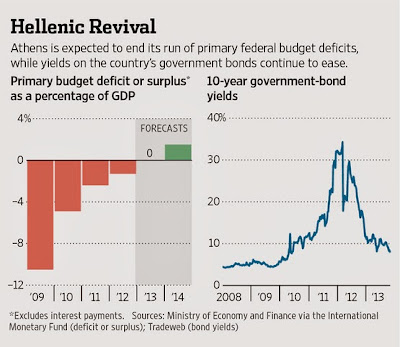 Posted by Yulie Foka-Kavalieraki at 11:20 PM