Employing unusually sharp language, the U.S. on Wednesday openly criticized Germany's economic policies and blamed the euro-zone powerhouse for dragging down its neighbors and the rest of the global economy.

In its semiannual currency report, the Treasury Department identified Germany's export-led growth model as a major factor responsible for the 17-nation currency bloc's weak recovery. The U.S. identified Germany ahead of its traditional target, China, and the most-recent perceived problem country, Japan, in the "key findings" section of the report.

The U.S. is itself dealing with persistently weak growth and has faced complaints from some countries about its attempts at reviving a sluggish economy, including the Federal Reserve's easy money policies. Finance leaders have also taken aim at the U.S. over the global economic impact of fiscal wrangling between the White House and Congress, including the government shutdown and debt-ceiling fight.

With the latest report, the Treasury Department has now criticized the world's three largest economies after the U.S. for their economic policies. 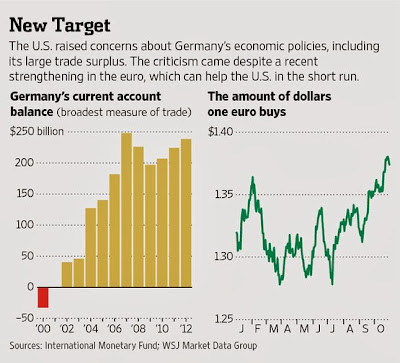 Posted by Yulie Foka-Kavalieraki at 11:20 AM