The Next 50 Years in Greece 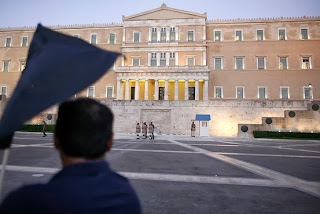 The International Monetary Fund's annual meeting kicks off in Washington on Friday, and while America's budget standoff will top the agenda, Greece's won't be too far down. At stake now, three and half years after Athens was made to accept its first bailout, is whether Greece will have to endure decades as a ward of its euro-zone neighbors.

That's not the story you hear in Brussels, Berlin and Frankfurt. In their tale, Greece's fiscal adjustment is on track and its economy is bottoming out. Greek banks have been recapitalized with private money, and Athens's budget is approaching an annual surplus—excluding debt service—for the first time since 2002.

None of this is false, but it obscures certain unpleasant facts. The Greek government's small budget surplus this year is partly the result of delaying tax refunds and the payment of bills to private contractors and suppliers. Kathimerini reported this week that the Greek labor ministry is considering expropriating private companies' assets to collect on unpaid social-security contributions. Possible asset confiscations may be one reason the Greek finance ministry predicts higher revenues next year due to an increase in "tax compliance."