Past Rifts Over Greece Cloud Talks on Rescue 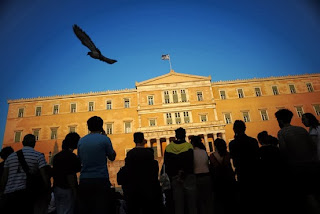 The International Monetary Fund proceeded with its record 2010 bailout of Greece despite deep internal divisions over whether it would work, according to confidential documents that contradict the fund's public statements.

The new details of the rift come as the crisis lender is now pressing European governments to forgive some of the country's debt in a fresh round of difficult talks. The idea is unpopular with Germany and other European nations because their taxpayers would take the hit. But it stands a chance because the IMF is now making future support conditional on significantly reducing Greece's debt burden.

The topic will be high on the agenda when finance ministers from around the world gather in Washington this week for the IMF's annual meeting.

The fund's determination to see Greece's debt burden reduced stems in part from lingering bitterness over how the first bailout was approved at a contentious May 9, 2010, IMF board meeting, according to some fund officials. The cache of papers documenting that decision—marked "Secret" or "Strictly Confidential" and reviewed by The Wall Street Journal—offers a rare glimpse inside the IMF as the international emergency lender struggled to avert a rapidly unfolding financial disaster.

IMF Document Excerpts
Posted by Yulie Foka-Kavalieraki at 8:17 AM