The euro zone and the International Monetary Fund were thrown into each other's arms when Greece's debt crisis began early in 2010. Now, officials say, they could be heading for a divorce.

As representatives from both sides meet at the end of this week in Washington to discuss Greece's need for extra cash and a lighter debt load, the clashes that have built up over the past three years are coming to a head.

"The divorce between Europe and the IMF is real," Antonio Borges , a former European director at the IMF, said in an interview in June, just months before he died of cancer at the age of 63. "The fund is going back to its normal way of business. It is an institution used to being alone in calling the shots," Mr. Borges said.

Mr. Borges arrived at the fund in November 2010, six months after the first Greek bailout was agreed. He left 12 months later citing ill health—but said in the interview that the real reason was his marginalization over the design of the €73 billion (roughly $99 billion) Greek program. 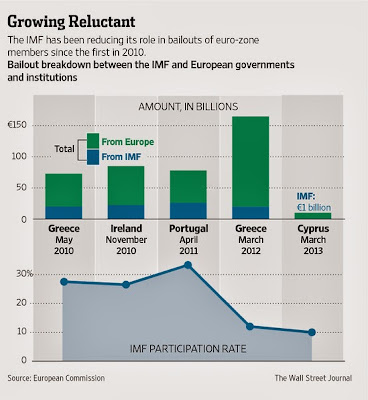 Posted by Yulie Foka-Kavalieraki at 9:55 AM