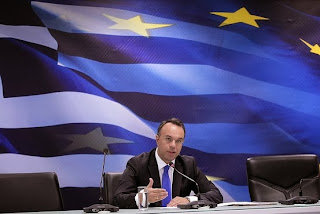 Greece's government presented a draft budget Monday that forecasts a return to growth next year after six painful years of recession and a government operating surplus that Athens hopes will allow it to return to bond markets for the first time since the debt crisis began.

In an ambitious fiscal plan that could still be derailed by the country's volatile political environment, the draft 2014 budget targets further cuts in spending and higher revenue from taxes in an effort to meet the goals set by Greece's international creditors. Experts from the European Union and the International Monetary Fund, who have helped bail out Greece twice, will return to Athens later this month to review the budget in closer detail and decide on whether Greece has done enough to receive more financial aid.

Amid an avalanche of austerity measures aimed at plugging the country's chronic budget gaps, Greece's economy has shrunk by roughly a quarter since its peak, forcing tens of thousands of businesses into bankruptcy and sending unemployment to a high in Europe. 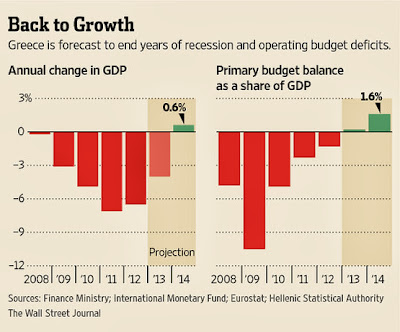 Posted by Yulie Foka-Kavalieraki at 7:19 PM