Greece forecasts it will emerge from recession in 2014 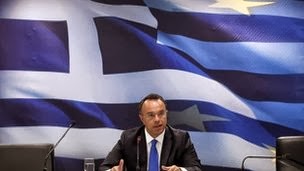 Greece has predicted that it will emerge from its six-year long recession next year, in a sign it may be finally recovering from its debt crisis.

The Greek government made the forecast in a first draft of its 2014 budget, which predicted 0.6% growth.

"We foresee the end of recession in 2014," vice finance minister Christos Staikouras said.

Greece will submit a final budget in November.

Greece's economy has shrunk by 23% since 2008, and it has been dependent on rescue loans from other European Union countries and the International Monetary Fund since 2010.