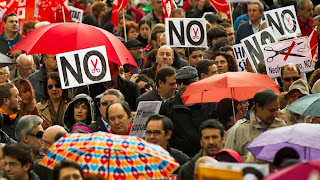 Tiago Costa and his teenage friends milling about outside a Lisbon youth training centre are surprisingly upbeat about the future of Portugal where youth unemployment has reached 37 per cent this year.

“We’ve hit the bottom, things can only getter better from here,” says Mr Costa, 17, who is confident of landing a job at a hotel by the time he finishes his three-year professional training course in tourism in 2015.

But economists caution that the nature of the recovery is fragile and that record levels of unemployment – currently at 12 per cent across the bloc, with peaks in the periphery at about 25 per cent – are jeopardising any turnround hopes.

“Structural unemployment is the biggest challenge ahead for the eurozone,” says Pier Carlo Padoan, chief economist at the OECD. “If unemployment does not fall back significantly you have a number of negative effects: fewer people in work means less income consumption, less demand growth and much lower confidence. All these things together put a further burden on the recovery.”

Jobless recoveries – an increase in economic growth without a fall in unemployment – are common in European economies where rigid labour laws discourage companies from hiring new people at the beginning of a upturn, says Markus Beyrer, director-general of Businesseurope, the EU’s largest employers’ lobby group.

Posted by Yulie Foka-Kavalieraki at 9:20 PM