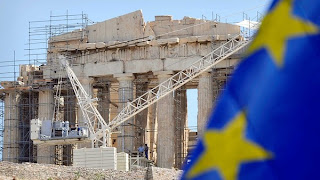 Greece may have lost the ability to throw international financial markets into a tailspin but events over the summer have illustrated that it can still convulse European politics.

Greece’s coalition government, led by Antonis Samaras, the centre-right prime minister, is clinging desperately to its majority after a series of defections over the way he has handled public sector redundancies, which included shutting down the public broadcaster in June.

But the debate about Greece’s financial health has also sparked unexpected tensions abroad. Last month, it roiled the election in Germany, which provides 27 per cent of the resources for the eurozone rescues. Wolfgang Schäuble, the finance minister, publicly admitted what many had already been saying in private: Greece will need a third bailout.

The first bailout lent Greece €73bn in EU and International Monetary Fund aid, while a second is due to provide another €173bn. The size and the scope of a third programme could take as much as a year to finalise. This means that the political skirmishing across the continent that has characterised the Greek rescue since its inception in May 2010 is likely to resume when the Germans finish voting at the weekend.

Monitors from the so-called troika of international lenders – the IMF, European Central Bank and European Commission – this week returned to Athens for what is expected to be the first of several bruising reviews of Greece’s performance that will pave the way for a final agreement sometime next year.

One senior EU official resorts to understatement when describing the daunting challenge ahead. “The last review was maybe a wee bit more boring than the next review will be for a variety of reasons,” he says. 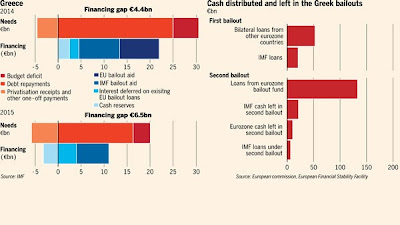 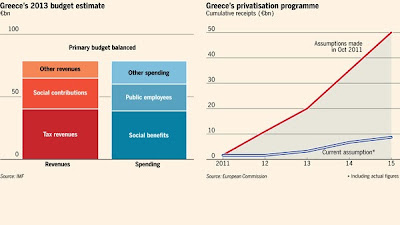 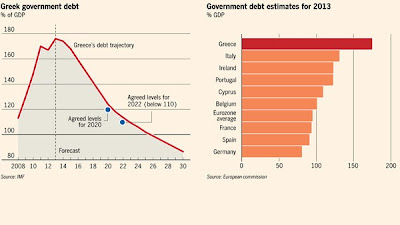 Posted by Yulie Foka-Kavalieraki at 10:38 PM