The beleaguered Athens government has arrested five deputies and 15 other activists from the fascist party Golden Dawn, including the leader, Nikolaos Michaloliakos. The Greek constitution prohibits the outright banning of political parties, but the authorities have got around that by classing Golden Dawn as a criminal organisation and linking it to the murder 11 days ago of a Leftist musician.

The tendency is not a new one, though it has perhaps been accelerated by the internet. George Orwell, writing at a time when there were actual fascist regimes in power, observed that “the word Fascism now has no meaning except in so far as it signifies 'something not desirable’ ”. 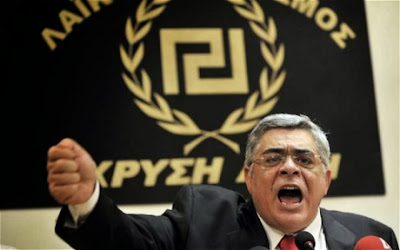 Posted by Yulie Foka-Kavalieraki at 12:33 AM