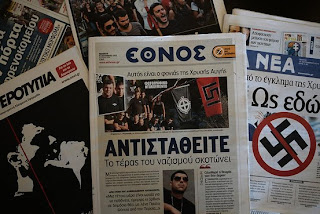 A recent wave of politically motivated violence—culminating in the killing of a left-wing rapper Wednesday morning—has shocked Greece and once again stoked fears about civil unrest in Europe’s most indebted country.

But for Greece’s government, struggling to implement a tough reform agenda demanded by international creditors, the latest problems on the street may be a blessing in disguise.

On Sunday, senior representatives from euro zone nations and the International Monetary Fund that finance the country’s €246 billion ($332.6 billion) bailout are due in Athens to decide on whether Greece is doing enough to earn its next batch of aid.

Beyond focusing on regular agenda items, such as monthly budget data and reforms efforts, talks may shift to how much more austerity political leaders can introduce as emotions run high in the country following Wednesday’s killing by a self professed member of the country’s far right Golden Dawn party.

The incident has prompted local newspapers to talk about the “monster of fascism threatening democracy” and the country slipping steadily towards chaos while the ultranationalists enjoy strong support in the recession ravaged country.