My English-speaking friends have asked me what really happened regarding the Golden Dawn party, the arrest of its leadership on September 28th and what is to follow.

The gist of it lies in two simple and obvious facts.

-Many people in high places felt that enough was enough and that they didn’t have to take any more shit from the Golden Dawn gang.

- The hands of the Government were untied after the murder of an innocent singer six days before and its leadership overcame its wavering attitude –to say the least- and acted swiftly and decisively.

Of course, the action took place at dawn and everyone was taken unawares by the effectiveness and rapidity of the action.

The political effect of the action cannot be overrated. New Democracy, the senior partner in the governing coalition scores some very important points.

-It turns the tables on SYRIZA, the main left-wing party demanding elections and accusing the government of being too soft on Golden Dawn thugs

-It reverses the power relationship in the political spectrum, as it is now the government and not SYRIZA that calls the game

-It restores the good name of Greek democratic traditions at home and abroad. 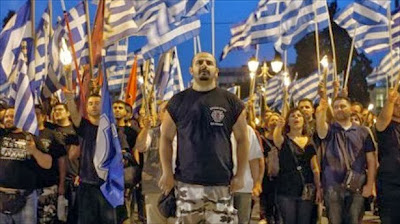 Posted by Yulie Foka-Kavalieraki at 9:00 PM